Unity can calculate the UVs for baked lightmapsA pre-rendered texture that contains the effects of light sources on static objects in the scene. Lightmaps are overlaid on top of scene geometry to create the effect of lighting. More info
See in Glossary when you import a model, or you can provide your own data.

This page contains the following information:

How to provide your own lightmap UVs

You can author your own lightmap UVs in the content creation software of your choice. Unity uses these UVs as input for its calculations.

Where you put this data depends on whether you are providing UVs for baked lightmaps, real-time lightmaps, or both:

A good UV set for lightmaps should adhere to the following rules:

How to automatically generate lightmap UVs

You can tell Unity to automatically generate lightmap UVs for a Model, using the Model Import Settings.

These are the settings that appear in the Model tab of the Model Import Settings, when you enable Generate Lightmap UVs.

To allow filtering, the lightmap contains lighting information in texels near the chart border, so always include some margin between charts to avoid light bleeding when applying the lightmap.

The lightmap resolution defines the texel resolution of your lightmaps. LightmappersA tool in Unity that bakes lightmaps according to the arrangement of lights and geometry in your scene. More info
See in Glossary
dilate some chart texels in the lightmap to avoid black edges, so the UV charts of your Mesh need to be at least two full texels apart from each other to avoid light bleeding. Use the Pack Margin setting to ensure you have enough margin between the UV charts of your geometry.

In lightmap UV space, the padding between charts need to be at least two full texels in order to avoid UV overlapping and accidental light bleeding. In this image, the black space represents the space between charts.

Placing UV charts too close together may cause cross-chart texel bleeding in the final lightmap. Placing charts too far away from each other wastes memory. The ideal packing margin of an object depends on how many lightmap texels are allotted to it.

The number of texels that Unity uses for a MeshRenderer depends on the MeshRenderer’s lightmap resolution and transform scale. To calculate a good margin, Unity needs to know the expected minimum values for these properties.

A MeshRenderer’s lightmap resolution is a combination of the Lightmap Resolution property of the Lighting Settings Asset for the SceneA Scene contains the environments and menus of your game. Think of each unique Scene file as a unique level. In each Scene, you place your environments, obstacles, and decorations, essentially designing and building your game in pieces. More info
See in Glossary
that the MeshRenderer appears in, and the Scale in Lightmap property of the MeshRenderer. Note that this means that the same MeshRenderer can have a different lightmap resolution in different Scenes.

You can use the Inspector to view the lightmap resolution of a MeshRenderer in a given Scene:

The following screenshots demonstrate equal resolution, but with different UVs. The first image has a high Angle Error, and the result contains unintended artifacts. The second image has the default Angle Error (8%). In Meshes with more triangles, angle distortion can significantly distort the shape. In the image below, two spotlights with the same parameters light the sides of a cylinder. The right-hand side of the cylinder has a higher Area Error value, which distorts the triangles and leads to a lower resolution, creating artifacts in the light. 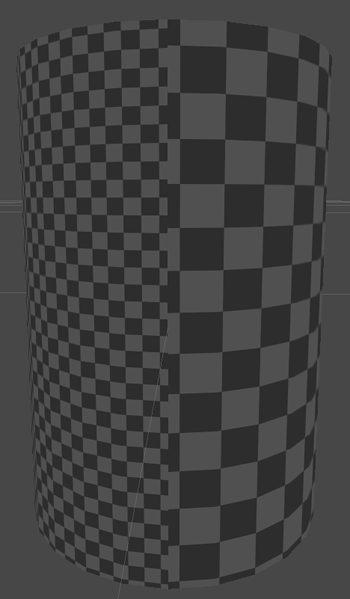 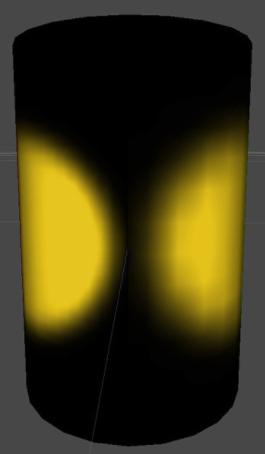